I Am Woman, Hear Me Roar 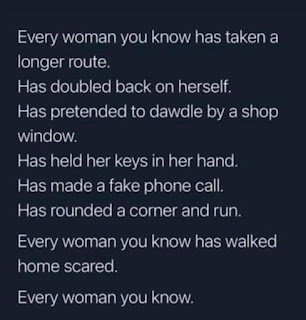 The other day I shared this quote with the Boy Scout. When I read it, it was almost with a little sigh, like “of course we have.” It is a given. He looked at me in surprise and asked, “you’ve done that?” Many, many times, especially when I was younger and more apt to put myself in a position to need to use those survival mechanisms. I wasn’t being foolish, I was living life.

Somewhere around the age of 30, when I was in my peak physical form and feeling strong and vital, there came the realization that no matter how hard I worked, even the average man could easily over power me. There was a nugget of anger that came with that knowledge. And also, a tiny nudge of fragility. The beginning of a feeling that would slowly grow over the years, getting bigger with a health set back, or when I could no longer do something on my own or when a nervousness sets in where there once was none. It just is.

I’m currently reading American Dirt by Jeanine Cummins. Beautifully written with a compelling story, I can only take it in spurts because it triggers the feeling of the immense powerlessness of being a women. I find that I need to push it away until I have to go back to find out what happens to our protagonist who has the unfortunate, regretful characteristic of being a woman on the run in Mexico.

Linda d
https://abovetheclouds619.blogspot.com/ Just making my way through life. Learning forgiveness for myself and others. Hoping to find the beauty and gratitude along the way.