To say I was a picky eater as a child would be a momentous understatement. Lucky for me I was 5th out of 6 and mom was tired for more reasons than just having a big pack of kids. I spent many a night in front of a plate of uneaten food before she would let me go and, finally, she gave up. Subsiding off of mostly boxed cereal, I started a lifelong love affair with a few specific brands.

As a younger girl Fruit Loops, Rice Crispies (coated in sugar) and Captain Crunch were often on the menu but it was Lucky Charms that held my heart. I ate them well into adulthood. Once I had kids I knew I had to tone down that part of me. Wanting them to be healthy and good eaters, I knew I had to do better. I limited their cereals to a certain amount of sugar grams per serving. So little that all the best cereals were only on the menu when we went camping. To my delight, as much as theirs, when camping Lucky Charms were abundant, as were many other sickly sweet bowls of yumminess.

Truthfully, many decades of my life were spent eating Life cereal as a compromise for the sugar laden ones. It was a habit, a routine (of which I have a number) that didn't exactly rule my life but was a bit of a compulsion. I think the chaos of childhood led to me loving the comfort of routine; it felt safe.

One day it stopped. One day there was a deep emotional upheaval and I woke the next morning realizing that I could not imagine consuming milk. Since that day, 7 years ago, the only milk I've put in my body has been a little tiny bit to cool an occasional bowl of oatmeal. I have not had a bowl of cereal since.

I don't miss it. Strange how emotions and memories are in charge of so much, including appetite and taste. 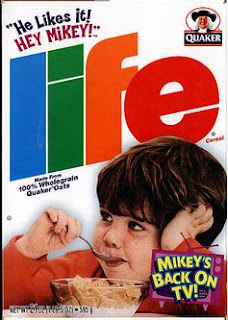