Cross That Bridge When We Get There

Had another phone interview. It went well but was extremely stressful and, truthfully, I sat and cried afterward. Can’t honestly tell you why but there you go.

Later we decided to go for a ride and it surprised me to find out there are still a few things I don’t know about the Boy Scout.

We took a ride up the Columbia River Hwy heading towards Astoria. At some point I was suppose to head west towards the ocean but if I headed east I would be going over a gorgeous old bridge. Turns out this is the Lewis and Clark bridge built in 1930. 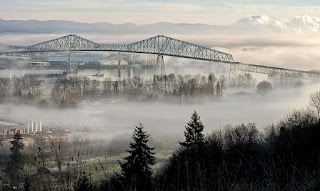 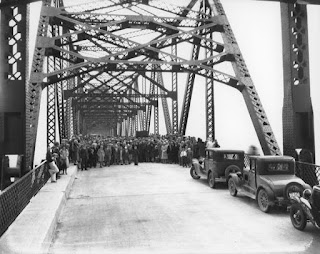 Well, I had to go over it and he was game. We get to the ramp, I’m all excited, and I look over to see him bracing himself. No big deal. I’d seen his fear of heights a few times, primarily at Notre Dame where he was trying so hard to have fun but holding on for dear life to anything he could grab. But this time I was surprised to hear a mixture of groaning and perhaps some quiet whimpering. He was quite beside himself. Luckily we get off and he recovered quickly. Unfortunately, we had to head back over to get to Astoria. I might have heard some cursing

After that, the ride to Astoria was stunningly beautiful.  We get through the little town and what do I see……another bridge calling my name. The Astoria-Meglar Bridge crosses the Columbia River right where it meets the Pacific Ocean.  I look at him and he smiles and says let’s do it. The entrance is a small circular ramp and it winds up to the beginning of the bridge. My poor man is in the passenger seat saying, “oh f%@&, oh f%@&, oh f%@&, over and over again.  Poor guy, I felt a little guilty but the bridge was incredible. 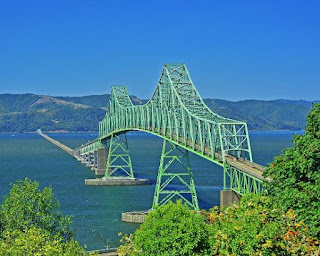 Built in 1966, this baby is over 4 miles in length.
Though he hates heights far more than I ever realized, the Boy Scout remained a good sport and let me have my fun. He spotted a sign and decided we had to visit. Dismal Nitch turn right. How could one possibly pass up Dismal Nitch?  We stopped and found a stunning view of Astoria across the Columbia. Finding the markers, we read that the Lewis and Clark corps got stuck on that little outcropping during a storm in November, 1802. They were hungry, wet, cold and their clothing was rotting off of their backs. Eventually they were rescued but not before Captain Clark gave it its name. 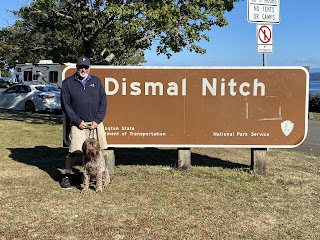 After that we had to turn right back around and cross that Astoria bridge a second time. He wanted ice cream after but I got him a latte instead. There’s a Starbucks on every corner!
Posted by Linda d at 3:00 AM